This browser is not actively supported anymore. For the best passle experience, we strongly recommend you upgrade your browser.
All Posts Subscribe
March 1, 2021 | 6 minutes read

The CMA’s revised merger assessment guidelines – Supposing is good, but finding out is better?

In January 2021, the UK Competition and Market Authority (CMA) finished its consultation on its proposed revisions to its Merger Assessment Guidelines (the Revised Guidelines). In short, the Revised Guidelines add detail as to how various types of mergers may be anti-competitive and adopt various presumptions that are likely to make merger control more interventionist.

However, is this a good thing? The quote in the title from Mark Twain would be a good summary of our views, but this warrants some elaboration.

Before commenting on the substance of the Guidelines, it is sensible to ask why they matter? The CMA emphasises that they serve two important objectives. First, they should set out when the CMA will intervene to safeguard consumers' interests. Second, they should provide firms with clear guidance as to the risks of intervention before they enter into proposed or completed mergers.

Indeed, intervention risks deter mergers due to the costs, delays and execution risks faced by buyers and sellers. This is obviously important because competition authorities should wish to deter anti-competitive mergers and avoid deterring competitively neutral or pro-competitive ones. Moreover, the same intensive and expensive CMA investigation process is applied equally to small and large mergers and, accordingly, one needs to be particularly concerned about the impact of increased intervention risks on smaller mergers.

In the current climate, deterrent effects may have greater economic impacts. Firms will be assessing whether they prioritise investment in the UK post-Brexit or elsewhere and, as the Covid-19 pandemic morphs from a healthcare crisis into an economic one, many firms will seek to merge to reduce costs and ensure that business investments are viable.

In our view, these two objectives of safeguarding consumers’ interests and providing clear guidance provide a good framework to assess the Revised Guidelines, which cover both the CMA’s “supposing” and its “finding out”.

Consider first the “supposing” stage of the process, Guidelines should clearly identify the theories of harm as to why and when mergers may substantially reduce competition, such that consumers’ interests are harmed in some tangible way. The CMA has sensibly added a variety of further material on this topic. For example, the Revised Guidelines emphasise that consumers may be harmed if non-price competition or innovation is reduced, even if prices do not rise. The CMA also sets out new material as to how digital mergers may be anti-competitive, reflecting its concerns of under enforcement of mergers involving the five largest global digital firms.

However, the CMA’s Revised Guidelines are silent on a range of topics that have been the focus of recent investigations. For example, the CMA’s revised jurisdictional guidelines published in December 2020 suggest that there is a low bar to find that the acquisition of a minority shareholding confers “material influence”. However, the Revised Guidelines do not address how the CMA assesses the competitive effects of such shareholdings, with this being the key issue in Amazon/Deliveroo (2020). In that case, the CMA’s assessment focused on how a 16% shareholding held by Amazon would affect its incentives to compete independently with Deliveroo in both restaurant delivery and online convenience grocery delivery in the coming years.

We concur with Mark Twain that “supposing” alone is insufficient, and “finding out is better”. However, there are counterviews. For example, writing in the Financial Times on 24 February 2021, Andrew Tyrie (former chair of the CMA) argues that the CMA “focuses too many resources on mergers and antitrust at the expense of consumer protection, investigating markets and advocacy”.

However, even if this view were correct, a better solution would be increase to the CMA’s modest budget of some £110 million in 2020/21, given the potential consumer benefits of properly enforced competition and consumer protection laws. In addition, in the year ending 31 March 2020, the CMA collected fines for infringements of the Competition Act 1998 of £29.7 million and merger filing fees of £5.5 million, reducing the cost to taxpayers. Indeed, many competition agencies generate more funding for taxpayers from fines and filling fees than they spend, including the Antitrust Division of the US Department of Justice (see further its Congressional Submission for FY2021).

A more nuanced counterview is that only a limited amount of “finding out” is required and instead one could instead rely on various presumptions. The Revised Guidelines adopt various new presumptions and changes to the existing presumptions, which can be grouped into three broad categories.

First, one could identify “safe harbours” or less definitive statements to indicate that certain mergers are unlikely to raise competition concerns. Interestingly, the Revised Guidelines expressly state that the CMA applies no thresholds to assess whether a merger leads to a substantial lessening of competition (SLC), such as market shares or number of competitors. The CMA has also chosen to delete all guidance on whether competition concerns are unlikely based on market structure or the nature of the merger. For example, it has deleted the references to competition concerns being less likely to arise in undifferentiated markets where market shares are below 40% and to most non-horizontal mergers being “benign”.

Second, one could assume that mergers in concentrated markets are anti-competitive or negative conclusions could be drawn from the parties’ internal documents. In this regard, the Revised Guidelines state that where the “prima facie” evidence of competition concerns is “stronger, especially where there is little evidence to the contrary, at an early stage, the CMA will expect to undertake less detailed analysis in deciding whether there is an SLC” (emphasis added). However, this raises obvious risks of confirmation bias.

For example, in the context of assessing unilateral effects in differentiated goods markets, the Revised Guidelines state that: “The smaller the number of significant players, the stronger the prima facie expectation that any two firms are close competitors, and therefore the less detailed analysis is necessary to further assess closeness between them”. This rather suggests that merger control analysis in 2021 can be reduced to a static market share analysis.

The CMA then makes a further statement indicating that it may rely on shares of supply to infer that firms are close rivals “[e]ven where the boundaries of the market are unclear”. The logical consequence is that there thus might be substantial diversion outside the relevant market. The Revised Guidelines further de-emphasise market definition in its assessment of competitive effects. This raises real risks if this leads to a failure to assess and quantify ‘out of market’ constraints that may collectively be an important constraint on the merged business.

Third, the Revised Guidelines downplay countervailing competitive constraints, including countervailing buyer power and the threat of entry and expansion. Indeed, the CMA has deleted an entire section on countervailing buyer and instead it asserts that buyer power is relevant only if it results in new entry. However, even if a merger reduces the number of existing suppliers to various customers, large customers may still have good outside options to which they can switch easily, such that they cannot be exploited. Conversely, even large suppliers’ outside options may be very poor where they are dependent on large customers, because finding alternative large customers or sales channels may be impossible. The sophistication of buyers is similarly highly relevant as this can affect their actual incentives and ability to switch to alternatives.

The CMA states that only rarely would entry and/or expansion prevent an SLC from arising, noting that in some previous cases the CMA expected entry or expansion that did not in fact occur. In our view, the likelihood of entry and expansion should not be prejudged. Moreover, any merger control assessment is forward looking, and the standard cannot be that the CMA always has perfect foresight. Indeed, unexpected entry and expansion may have occurred in other cases where the CMA found a SLC, or indeed the market might otherwise have remained sufficiently competitive. At phase 2, it would be correct for the CMA to clear a merger if offsetting entry or expansion is more likely than not, reflecting that the legal standard is whether an SLC is to be expected.

In summary, the Revised Guidelines strike a substantially more interventionist tone and leave readers with the clear impression that the CMA is not a fan of Mark Twain. Accordingly, it’s appropriate to end with another of his quotes, which highlights the dangers of not “finding out” and properly weighing up evidence to making the right decisions: “What gets us into trouble is not what we don't know. It's what we know for sure that just ain't so."

The authors (along with Addleshaw Goddard LLP) submitted a more detailed submission on the above themes as part of the CMA’s formal consultation process.

“What gets us into trouble is not what we don't know. It's what we know for sure that just ain't so." 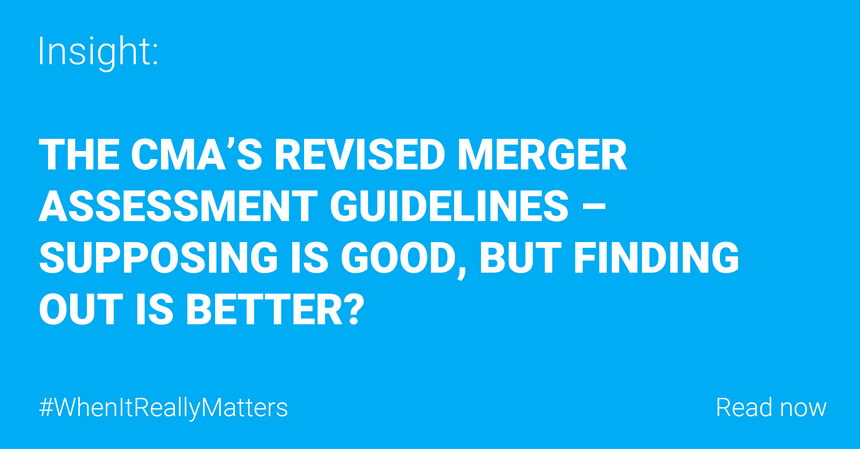 Matt Hunt
Managing Director
By Jason McDannold Yale Kwon
As the economic outlook continues to be murky, plenty of companies are making cuts. But you can’t cut your way to prosperity. There are...